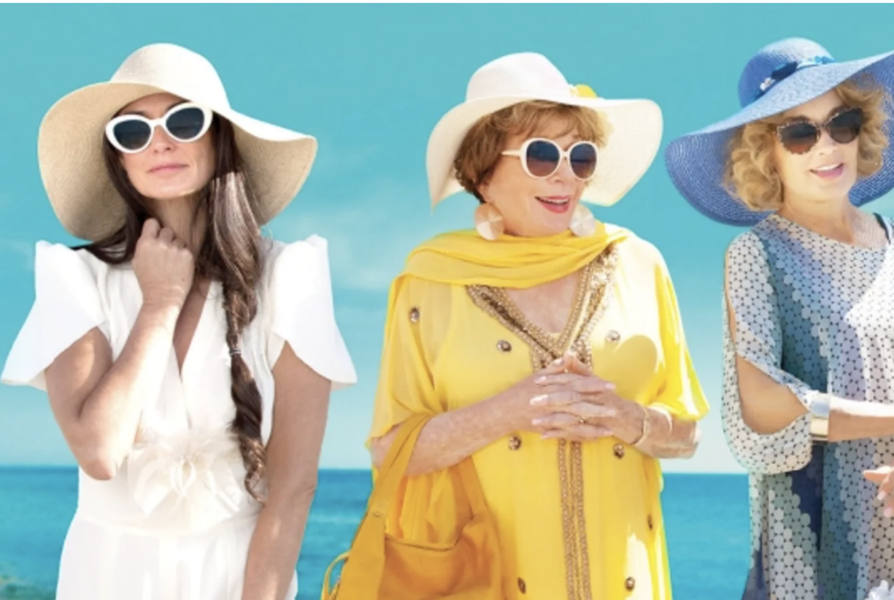 10/08/2021
Here’s a film that will make you smile! A bit naughty as the title suggests and quite daft with no fast car chases barring one taxi! No-one gets shot or maimed, no guts blood or glory – sorry thrill-seekers! It gets a 0% rating on the review site Rotten Tomatoes! but as one reviewer said it’s not Shakespeare and worth watching for the cast alone.
We have the fabulous Shirley Maclaine, Sir Billy Connolly and Jessica Lange having a whale of a time in her role of abandoned wife turns…..well I won’t spoil the surprise. In a supporting role is Demi Moore as we’ve not seen her before, all uptight and nerdy – a role initially for Sarah Jessica Parker who may have been a more obvious choice but the surprise works well.
Without needing any any spoiler alerts, Shirley’s character Eva loses her husband- the funeral scene is funny and sad in equal measure- friend Maddy (Lange) comes out with some one-liners many of us would love to be brave enough to say! When the insurance cheque arrives the sum if for $5,000,000 rather than the expected $50,000 the caper begins.
For a film with a mainly American cast we then unexpectedly set off to Gran Canaria and its beautiful capital Las Palmas. Many of us Brits may be more accustomed to the scenes shot at Meloneras and the Maspalomas dunes with beautiful shots of sandy beaches and blue skies. Its all quite glamorous at the Lopesan hotel resort they used for filming and some beautiful suites probably only the A-listers get to see.
Probably our favourite character is the world worn Mr Vespucci as the insurance agent that has to investigate the possible insurance fraud and try to recover the monies before they spend the lot! He shows a touching lack of certainty and humanity and there’s a nice chemistry with him and Demi Moore who joins him on the chase.

If you want to switch your brain off, not take life too seriously- or the film! and just enjoy some Saturday night escapism this may just be up your street! Apparently in one shot (ref IMDB) Shirley Maclaine laughed solidly for 11 minutes at the hilarious Billy Connolly- the last film before he officially retired. Have fun and frolics! and remember its never too late to pursue your dreams or reinvent yourself!

Why are we dispensing Feel Good Films?

There’s a view that what we watch and focus on affects our energy, our mood and even how we respond in daily life. There’s a quote we love ”
When you focus on the good, the good gets better” – Abraham Hicks
Why not try an experiment for a week- switch off the bad News (if it’s important enough you’ll get to hear about it anyway) read and watch inspiring stuff and try to ignore the moaning Minnies around you! You may just start to look at life a little differently.